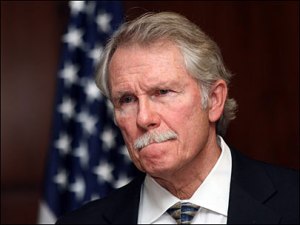 At the conclusion of an emotional and hectic week in Oregon politics, Governor John Kitzhaber tendered his resignation earlier today. His full statement can be found here.

Governor Kitzhaber was in the midst of his fourth term as Governor of Oregon. He began his political career when he won election to the Oregon House of Representatives in 1978, later he would serve in the Oregon Senate before being elected Governor in 1994. Oregon’s constitution only allows a governor to serve two consecutive terms, and Kitzhaber left the position for eight years after his second term in office. He would then run again in 2010, and would be reelected in 2014.

His resignation comes after a series of controversies stemming from allegations surrounding the activities of his fiancée, Cylvia Hayes, and worry over the influence that Hayes had within the governor’s office. Although there currently is an investigation into those claims of potential impropriety, there was mounting pressure from Oregon’s legislature for the governor to step down.

Secretary of State Kate Brown is next in line to become Governor of Oregon. She will be Oregon’s second female governor, and has been involved in Oregon politics since being elected to the Oregon House of Representatives in 1991.

1L business Courts Crime Current Events Environmental Law Eugene Law School law school life Oregon Law PIELC Politics Sexual Assault Student UO Law
The content and opinions expressed on OregonLawBlawg do not necessarily reflect the views of nor are they endorsed by the University of Oregon School of Law or the University of Oregon.
Loading Comments...
%d bloggers like this: